After moving to Sydney in 2009, I spent most of my time around the University of Technology’s Design, Architecture and Building faculty. I often walked around Ultimo to clear my head, taking in the delightful mixture of old and new. One building I particularly enjoyed passing through was the ABC building. As I cut from the chokingly busy Harris Street to the more serene pedestrian goods line, the sense of being part of a public institution always stayed with me. I could join an audience for a show, read about the institution’s history, or even view into the 24 hours news channel, throughout, my presence in the building reinforced that first and foremost, the publicly funded ABC served the public.

In 2017, after a security breach and subsequent terrorist advice from the Australian Federal Police, the ABC foyer shut to the public. The closure was understandable; the main disappointment was why either a perceived or real anger existed towards the ABC. Not having the political science skills to unpack the years of political rhetoric that has undermined the ABC’s reputation, I decided to put my skills towards reimagining the building. In collaboration with William Cooper, we asked what would happen if the ABC opened out to address the street and broader Ultimo district rather than closing off and excluding. The project speculated what an “ABC Opened” would look like to match the “ABC Open” marketing slogan.

Through the project, William and I sought to question how the ABC building performed and see if these could spill out into the public domain. An initial “forensic mapping” uncovered relationships between different scales, from room to building to block to the city and identified a shrinking in office and media production space created by online working and technology advances. Consolidating and sharing space meant the public could once again observe the inner workings of the National public broadcaster. In return, the ABC received new recreational areas and opportunities to engage with their audience physically.

The reason given for closing the ABC was the unmanageable mixing of staff with the public. ABC opened avoids this by providing the whole ground level to the public while providing ABC employees new secure access from underneath. A series of public-private domains overlap where private spaces pop up through the ground surface to reveal media studios or pierce up into the ABC building above. The scheme produces two new public domains for Sydney; the public ground-level connects parts of Ultimo, while a facilities loop on the third floor offers archives, studios, a library and a cafe.

The ABD Opened scheme imagines a future of media where audiences engage with news and broadcasting. Rather than closing out the public, the project proposes an architecture that invites the public to view broadcasting through transparency and engaging social media. The building sets a new expectation for public broadcasting where its audience feel part of both media content and its production. 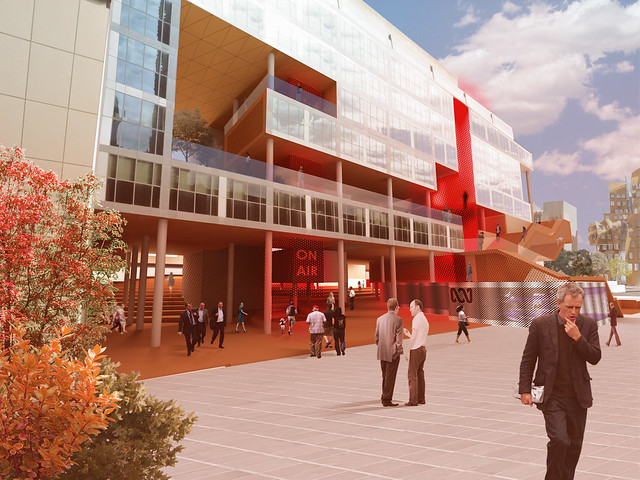