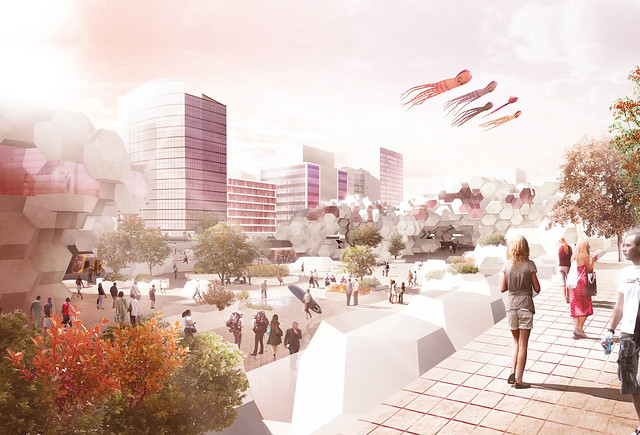 The Hex Building speculates on the architectural possibilities of a new train station for the suburb of Bondi, Australia. Produced for a competition in collaboration with Nicholas Malyon, Leonardo Quinones and Oliver Petrie, the project studied the train station as an architectural type, the effect of train infrastructure on urban contexts and the impact of a rail on the future of beach suburbs in Sydney as a whole.

At the time of the project the population of Sydney sat at 4.5 million, with a projected population of 5.5 million by 2026, and 7 million by 2056. A consequence of population growth and current low density urban planning strategies means Sydney’s expansion to the west would provide detrimental environmental conditions, problems with food access and public health consequences due to forced reliance on car transport. The project emerged from an exploration of coastal densification strategies that reduce proximities between live and work locations, and to reduce pollution and congestion through public transport.

The future Bondi is one of a semi autonomous hub, where live and work functions co-exist, existing as part of a connected series of high density beach suburbs, and linked into the existing city rail network. Such a speculation assumed a future of increased density, our response integrated and distributed fine grain retail, market and civic functions to respond to both transient seasonal use and permanent activities for local residents. The overall proposal installs a new public space within Bondi that aims to create an additional focal point to the iconic beach, creating an activated zone between the beach and station via a selection of pedestrian routes. 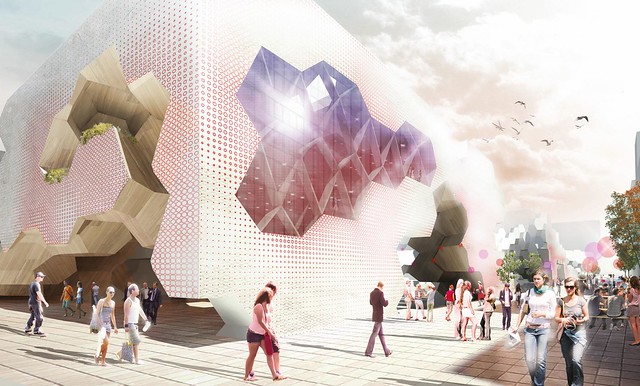 In Bondi’s current form, the population of 10,400 experiences an influx of up to 4,000 people a day, during summer weekends. The extreme fluctuation of population results in unequally distributed uses of its space across daily, weekly and seasonal cycles, resulting in unpredictable use patterns for retail and civic facilities. What is more, much of the economically successful spaces of Bondi cater for transient visitors, providing little use for residents.

As a train station would increase the number of visitors to Bondi, the scheme paid close attention to the benefits experienced by the local residents created through greater exposure to visitors. The central idea to the station centred on distributing activities throughout the urban space, and providing support functions for the increased numbers of local residents living and working in the area. 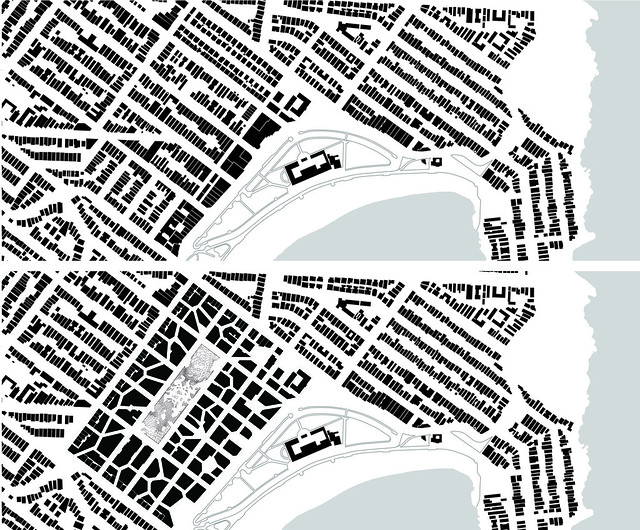 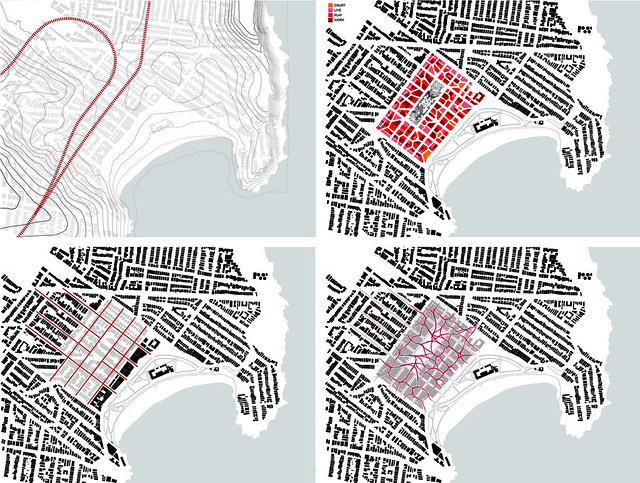 The underground train line feeds into a covered rail platform feeding into a sunken public square, acting as both station concourse and useable public space. Beyond the square the station extends out into the built fabric to create a continuous space of markets, civic and commercial activity. 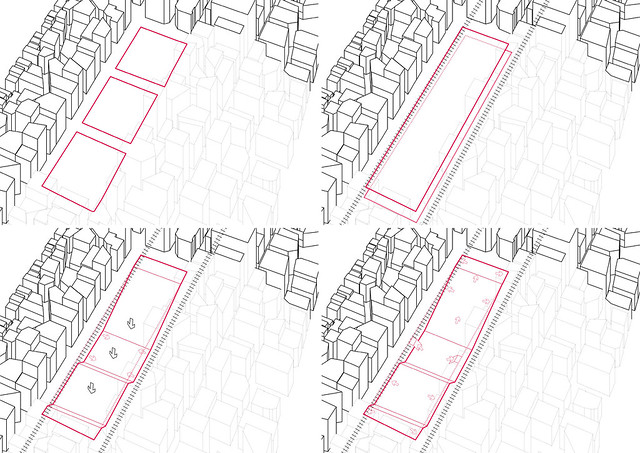 The architectural form developed through an investigation of space filling geometries, leading to the use of the truncated octahedron. The suitability of a unit form arose from an initial analysis of market typologies, and the potential recognised for both market and civic functions to occur within a particular scale and through a faceted geometry. A deformation of the base geometry grid applied an extra layer of complexity in order to create spatial variation and add scalar differences into the fabric of the scheme.

This deformation responded to an intended influence of the urban fabric to filter movement and offer multiple routes of access. The design process employed digital modelling tools to explore processes of erosion through simulating bottom up interactions of pedestrian movement, carving out space based on top down decisions of material permanence. Vertically the station form dissolves to create undulating surfaces and cavities within the surface to allow light into covered spaces. The combination of deformed urban grid, unit geometry and subtracted form provides explorable spaces of different scale, mixing different types of market functions to achieve activity across the entire precinct. 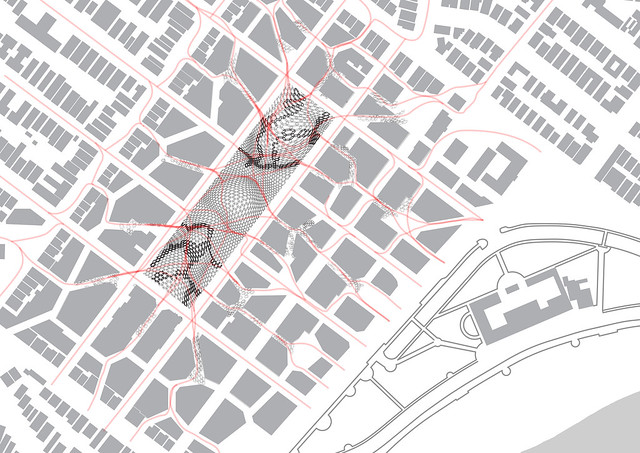 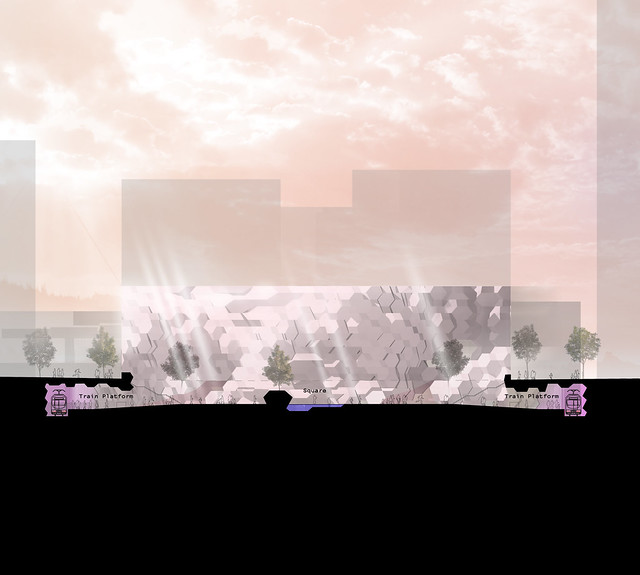 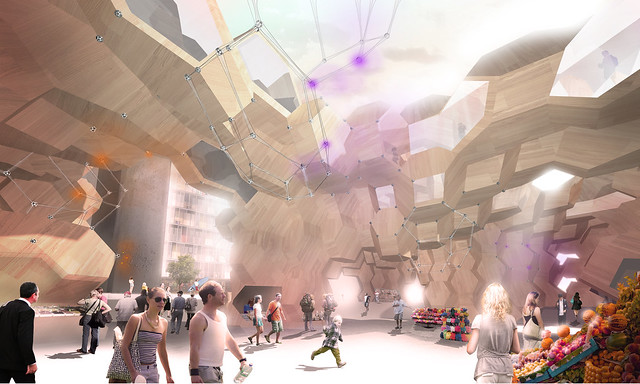 Towards the North and South of the scheme the edges of the space packing geometry reads as an uninterrupted edged box, softened through a surface treatment and fenestration into the civic functions. The hard exterior of the edge contrasts with the timber treated market and softer material language. The new public train station of Bondi creates a new space that balances the extreme attraction of the beach, and in doing so activates a new densified fabric of the beach suburb allowing residents of Sydney and Bondi to live and work next to a beautiful beach. 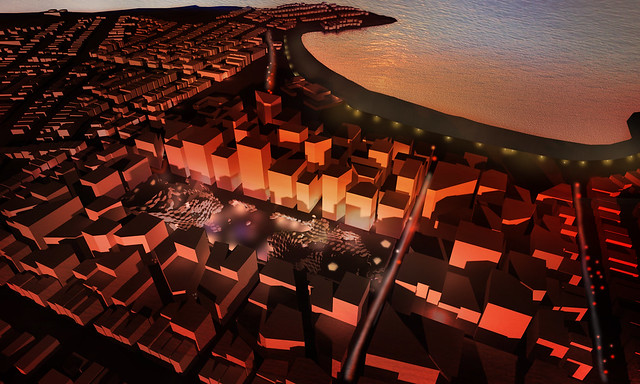